This interview was originally posted here 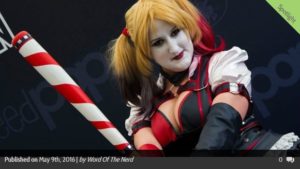 Word of the Nerd is pleased to present to you one of our most popular features, Cosplayer Spotlight.  We feature new and talented cosplayers from the cosplay community.  Be sure to check back every day to catch some up and coming new cosplay talent or get a look at some well established and already famous members from the world of cosplay.

Name: PrincessJazz Cosplay
Age: 25
Location: Canberra, Australia
Occupation: Registered Nurse
I’ve been Cosplaying for six years, and re-enacting for three. I feel they both challenge me in different ways both artistically and creatively.

How did you first get into cosplay?

I kind of fell into cosplaying. I’ve studied textiles and dressmaking previously. When I went to uni for my nursing/paramedics degree they had a Heroes and Villains night and for the hell of it, I made Jill Valentine (STARS) from Resident Evil for it. made everything, (even the gun). a couple of weeks later was a major Convention in Australia so I decided to go with a girlfriend wearing the same costumes we had made for the party.

How much time do you spend making your costumes?

Honestly, not enough time. I have a bad habit of making my costumes days (and in some cases hours) before an event. My workload doesn’t give me a lot of free time, and when it does, I tend to play videogames instead of sew.

You could say that I love working to a deadline by panicking hours before its due.

My DC Arkham Knight Harley Quinn. It was probably the most popular costume I’ve done so far, and its most definitely the one I’ve had the most photos of. It gets a lot of attention and I love being silly for a few hours.

Do you usually get positive reactions from fans?

Most of the time but there are a few troublemakers out there who hide behind their keyboards.

What’s the next costume or event you’re preparing for?

Wonder Woman from Batman Vs Superman and a Star Trek Bunnysuit.

What characters inspire you the most?

Wonder Woman because she’s strong,independent, and stands up for own ideals, she essentially doesn’t need no man to tell her that she’s the toughest badass this side of Amazonia.

Harley Quinn: because she’s that little bit off kilter, she has fun but also has a human side to run counterpoint to the crazy.

What is your primary area of inspiration for your cosplay?  Comics, anime, games or other?

Primarily comics. I’m a giant geek, and I love DC more than anything (except maybe Star Trek) so a lot of the cosplays i want to do come from the pages of DC’s library.

What are your best resources for cosplay materials?

Remnant Warehouse online for my fabric and Sarlacc Pit for worbla etc. Where I live, I don’t have access to a lot of places to get materials, so I have to source everything online, which can extend already razor-thin deadlines.

What’s one piece of advice you’d give new cosplayers?

Start small, start comfortable and don’t be afraid to ask others for help, cause we all started somewhere.

What’s your golden rule of cosplay?

Be whoever you want, and don’t let others stop you doing that.

What does your budget run per costume?

$200-500, almost everything that I make is fabric based, so I’ve been lucky to not have to spend much. But on the flipside, I do buy a LOT more than I usually need.

Is there anything that would make you stop cosplaying?

Body-shaming and people being negative for no reason other than to make themselves feel better.
I’m a curvy-cosplayer, while it doesn’t happen to me, I’ve seen trolls go after girls like me for not being thin enough to cosplay. I’ve seen great women give up this hobby simply because there is a section of the internet that can’t accept that a woman can have curves.

If money and time were no issue, what’s your number one over ambitious cosplay?

Its not so much time or money but confidence, but I’ve always wanted to do my namesake Princess Jasmine, or Slave Leia, but not quite there yet to do them.

Why do you cosplay?

My time is spent between re-enacting and costuming. For my Re-enacting I feel like I’m embodying a historical aspect and bringing a piece of history to others, whereas my cosplay is for fun, I use it as a creative outlet from my job and life.

You can follow and view more of PrincessJazz Cosplay here