This has been a very difficult post to write.

When I started cosplaying in 2010 I had the identical body measurements of Jill Valentine from Resident Evil and I cosplayed her first four costumes (three if you don’t consider RE: Apocalypse and RE3 to be different costumes). Regardless of that fact, some people (men and women) took issue that a curvy woman with actual boobs and hips was cosplaying as their favourite character. From that point, I became aware of the body expectations that society imposed onto women.

It goes without saying that our culture has given women a fairly high bar to reach in terms of beauty standards, and this has entered into cosplay as well. Not only does your costume have to look immaculate as if it came out of the subject matter directly, but you yourself, have to be immaculate, even to a fault. It’s not enough to have scaled your costume to the nth degree, utilised every reference photo you can, if you don’t fit what society perceives the way that character to look, then you’ve ‘failed’. If the culture see’s that character as thin, or as busty, (even if they’re not designed

that way) if you stray outside that paradigm, you will be shamed for it.

I have been shamed in the past. I have been told I am too fat to be Jill Valentine and Slave Leia. The second costume I ever wore was Princess Leia’s iconic bikini. I felt alright wearing it, but I wastoo nervous to ever wear it in public, at that time I had never seen a woman with curves like mine wear that cosplay, and that scared me. I genuinely believed I was too curvy for that costume. It also showed off a lot more of my body that I had ever really shown off before, as I hadn’t even worn an actual bikini before that point. I wore it the one time, and never wore it again. The few photos that my fiancé took have since done the rounds and it is ironically for all the notoriety attached, it remains one of my most requested costumes to reprise.

I have been cosplaying for six years, my fiancé has been doing this for nearly ten. In that time we have both seen cosplayers, both men and women avoid certain costumes, or certain poses, and in some cases, have actually left the hobby, because of body image, both internal and external. I’ve seen gorgeous women targeted for being ‘too fat for a particular costume’, andequally gorgeous women refrain from posting pictures because of concerns to their appearance. In fact what prompted me to write this post was just that. 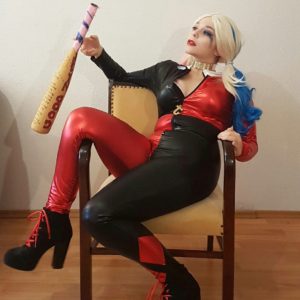 Six weeks ago, one of the gorgeous Harley Quinn cosplayers I follow on Instagram @jokers_angel posted photos from a recent photoshoot in the iconic Harley leotard. The captain on one caught my attention was that she was afraid to post additional photos because of her ‘tummy and stomach rolls’. This hit me quite hard, as like her (and every other female cosplayer who jumped onto her post to show their support) I have issues with my stomach.

My own insecurities stem from the fact that it’s not as toned as I’d like it to be, and after six abdominal surgeries over twenty seven years, I have a lot of scar tissue and a mangled belly button. I actively try and hide my navel and lower abdomen these days, the bikinis I wear now are all high waisted and it takes a lot for me to share any photo that involves my belly. It also doesn’t help that I’ve received a lot of attention from the belly fetish community, which actually only serves to make it worse.

Over the course of the day, this stuck with me that this beautiful woman had almost refrained from sharing an amazing photo just because of basic anatomy. That societal standards of beauty and cosplay perfection had somehow made it impossible for actual living humans to portray the characters they love. The following day, I put my own insecurities aside for a moment, and posted on Instagram a side-by-side photo of jokers_angel in her amazing Harley Quinn cosplay, opposite my Nurse Chapel “Legs for Days” photo (which was one of my most popular posts at the time). Both of us are sitting down, and both of us are showing ‘tummy rolls’ because our abdomens are being cut in half by the act of sitting down. I had intended on showing solidarity in the obvious, I had not intended on what happened next. 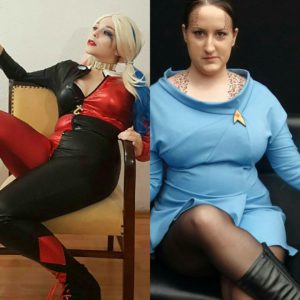 I started receiving comments from other female cosplayers. Other gorgeous women thanking me for posting the image, for addressing a concern that I had no idea was affecting so many.  @itsthenerdylife, a page I’m a Page Model for, picked up the photo and re-shared it, further spreading the message.

Fast forward to this morning. I had essentially forgotten about this article, I had placed it in the ‘to do when not busy’ basket, and never went back to it. And then I got a message. A cosplayer @Colombocosplay had seen the post on @itsthenerdylife, and it had given her the self-confidence to become a swimsuit promoter and to shoot herself in two revealing swimsuits and was going to post them untouched to further promote the notion of self-love. I actually cried like a baby, in fact I’m tearing up right now as I write this.

I have always been supportive of other cosplayers, both my fiancé and I have taken a number of newbie cosplayers under our wings over the years, but this was the first time that I actually felt like I had done something. In all reality, there are no rules on who can and cannot cosplay a character. It doesn’t matter if you match the source material exactly, or you don’t, the only person you ever have to impress is yourself.